Chinese culture (simplified Chinese: 中华文化; traditional Chinese: 中華文化; pinyin: Zhōnghuá wénhuà) is one of the world’s oldest cultures, originating thousands of years ago. The area over which the culture prevails covers a large geographical region in East Asia and is extremely diverse and varying, with customs and traditions varying greatly between provinces, cities, and even towns as well.

Chinese civilization is historically considered the dominant culture of East Asia. With China being one of the earliest ancient civilizations, Chinese culture exerts a profound influence on the philosophy, virtue, etiquette, and traditions of Asia to date. Chinese language, ceramics, architecture, music, dance, literature, martial arts, cuisine, visual arts, philosophy, business etiquette, religion, politics, and history have global influence, while its traditions and festivals are also celebrated, instilled, and practiced by people around the world.

From the Qin dynasty to the late Qing dynasty (221 BC-AD 1840), the Chinese government divided Chinese people into four classes: landlord, peasant, craftsmen, and merchant. Landlords and peasants constituted the two major classes, while merchants and craftsmen were collected into the two minor. Theoretically, except for the position of the Emperor, nothing was hereditary.

China’s majority ethnic group, the Han Chinese are an East Asian ethnic group and nation. They constitute approximately 92% of the population of China, 95% of Taiwan (Han Taiwanese), 76% of Singapore,23% of Malaysia, and about 17% of the global population, making them the world’s largest ethnic group, numbering over 1.3 billion people.

In modern China, there are 56 officially labeled ethnic groups. Throughout Chinese history, many non-Chinese ethnic groups have assimilated with the Han Chinese, retained their distinct ethnic identities, or faded away. At the same time, the Han Chinese majority has maintained distinct linguistic and regional cultural traditions throughout the ages. The term Zhonghua Minzu (simplified Chinese: 中华民族; traditional Chinese: 中華民族) has been used to describe the notion of Chinese nationalism in general. Much of the traditional identity within the community has to do with distinguishing the family name.

During the 361 years of civil war after the Han dynasty (202 BC – 220 AD), there was a partial restoration of feudalism when wealthy and powerful families emerged with large amounts of land and huge numbers of semi-serfs. They dominated important civilian and military positions of the government, making the positions available to members of their own families and clans. After the Tang dynasty’s yellow emergency, the government extended the imperial examination system as an attempt to eradicate this feudalism.[ Traditional Chinese Culture covers large geographical territories, where each region is usually divided into distinct sub-cultures. Each region is often represented by three ancestral items. For example, Guangdong is represented by chenpi, aged ginger and hay. Others include ancient cities like Lin’an (Hangzhou), which include tea leaves, bamboo shoot trunk, and hickory nut. Such distinctions give rise to the old Chinese proverb: “十里不同風, 百里不同俗/十里不同風”: “praxis vary within ten li, customs vary within a hundred li“. The 31 provincial-level divisions of the People’s Republic of China grouped by its former administrative areas from 1949 to 1980, which are now known as traditional regions.

Residence of the Lu Family in Dongyang, built in the Ming period. 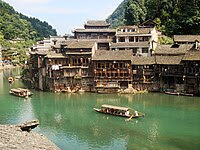 Fenghuang County, an ancient town that harbors many architectural remains of Ming and Qing styles.

Since the Three Sovereigns and Five Emperors period, some form of Chinese monarch has been the main ruler above all. Different periods of history have different names for the various positions within society. Conceptually each imperial or feudal period is similar, with the government and military officials ranking high in the hierarchy, and the rest of the population under regular Chinese law. From the late Zhou dynasty (1046–256 BCE) onwards, traditional Chinese society was organized into a hierarchic system of socio-economic classes known as the four occupations.

However, this system did not cover all social groups while the distinctions between all groups became blurred ever since the commercialization of Chinese culture in the Song dynasty (960–1279 CE). Ancient Chinese education also has a long history; ever since the Sui dynasty (581–618 CE) educated candidates prepared for the imperial examinations which drafted exam graduates into government as scholar-bureaucrats. This led to the creation of a meritocracy, although success was available only to males who could afford test preparation. Imperial examinations required applicants to write essays and demonstrate mastery of the Confucian classics. Those who passed the highest level of the exam became elite scholar-officials known as jinshi, a highly esteemed socio-economic position. A major mythological structure developed around the topic of the mythology of the imperial exams. Trades and crafts were usually taught by a shifu. The female historian Ban Zhao wrote the Lessons for Women in the Han dynasty and outlined the four virtues women must abide by, while scholars such as Zhu Xi and Cheng Yi would expand upon this. Chinese marriage and Taoist sexual practices are some of the rituals and customs found in society.

With the rise of European economic and military power beginning in the mid-19th century, non-Chinese systems of social and political organization gained adherents in China. Some of these would-be reformers totally rejected China’s cultural legacy, while others sought to combine the strengths of Chinese and European cultures. In essence, the history of 20th-century China is one of experimentation with new systems of social, political, and economic organization that would allow for the reintegration of the nation in the wake of the dynastic collapse.

7 basic questions to ask for personal information in Chinese